In the beginning, there was a man who had lived several past lives but, of course, he couldn’t remember any of them. His name was Janus and he was a silversmith, making jewellery for very wealthy patrons. He was very good at his craft and people came from far and wide just to have a piece of his work.

One day while he was sitting in his workshop, making a particularly fine piece of silverware for a noblewoman with every exacting demands, the little voice in his head intruded on his thoughts and told him that he would have to go far away to a land he had never been to before.

He was astonished, for he had never heard the Voice so clearly before. It had been there all along, giving him ideas for his work, telling him to add a bit here and lose a bit here; twist this bit this way and add a jewel or crystal there. But never had it spoken so clearly and definitely. It was so definite that he knew that he would be unable to ignore it, so he collected together some of   his possessions and set off on the journey, leaving his wife and baby daughter behind. His wife was distraught but knew that there was nothing she could say that would make him change his mind. Once he had an intention he could not be swayed until it was achieved. A very good quality one might say, in other circumstances…

He travelled for many miles, collecting and accumulating many beautiful and different designs for his work. Never once did he wonder about his wife and child, alone with no-one to protect them. All he could think about was his craft.

One day, while travelling down a particularly lonely road, he met a handsome red fox, dressed in a red coat and tails.

“Hello,” said the fox with interest. “Where might you be going, dressed so fine and all?

“I’m on a special journey,” the man replied, amazed that he had actually met a talking fox. He’d read about them, of course, but never really believed them. They were imaginary, everyone knew that.

“I see,” said the fox, stroking his chin thoughtfully. “Might I travel with you aways?”

“Be my guest,” the man answered, delighted to have some company on his journey. However, what the man did not know was that the fox was a thief, but not just any thief. This fox stole memories and hid them in the small tin box he always carried with him.

One day the man asked the fox what he carried in his tin box, for he had noticed that the fox never let it out of his sight.

“Oh this?” the fox,  answered casually. “These are all my treasures.”

“By all means,” answered the wily fox, for this was how he stole their memories. He opened the box with a little key which he kept in his waistcoat pocket. He slowly opened the lid, watching the man’s curiosity growing and growing. Suddenly the man pulled back in surprise.

“Well, of course,” said the clever fox. “My treasures are not to be seen. They are far too important to be visible.”

The man was confused and suddenly found that he couldn’t think straight.

“I feel strange,” he said and he sat down to rest on the grass verge. His head was spinning, and his heart was racing and he thought he might faint.

He sat there, with his head in his hands, struggling to feel normal. What he didn’t know was that the box was full of memories, other people’s memories, and now his memories were in there too and he didn’t even know it. The fox used other people’s curiosity to trap their memories so that he could use them for himself. They made him feel bigger and better than everybody else. Because he was, after all, a very small fox and he needed to feel very big.

The poor man sat on the side of the road, shaking his head, trying to focus, his eyes  flicking this way and that. 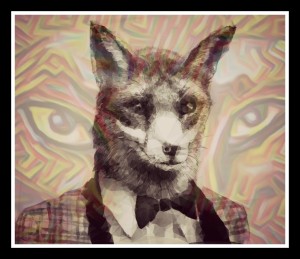 “Well, if you’re ready then,” the fox said, locking his box and tucking it back under his arm.

“What?” asked the poor, bewildered man. He didn’t know that his memories were now in the little tin box under the fox’s arm. “Where are we going?”

“Oh, have you forgotten?” asked the fox with a sly grin. “You were going home.”

“I was? Oh yes, now I remember,” he said, confused. “Oh but I can’t seem to remember where my house is…”

The fox gave his companion some directions knowing full well that the man would be lost forever. But once he was out of sight he would even forget the fox, and so the fox didn’t care.

The poor man wandered the countryside looking for his home, which he could never quite find. He’d forgotten that he was a master craftsman and that he was on a special journey. He couldn’t remember anything at all. So he wandered and wandered until one day he met a young woman who asked him where he was going, for he looked very bedraggled and old.

was. The young woman recognised him as her long lost father who had set off on his travels many years before and who had never returned. Even though she had not seen him for many years she could never forget his face. She had looked at the only picture she had of him, for all of her life. Every part of his face was engraved on her memory…and her heart.

“Perhaps I can help you?” she said to the old man.

“That would be very kind,” the old man answered with relief. He had been travelling for such a long time and no-one had thought to help him, seeing only the bedraggled old man.

The young woman, who loved the man greatly, guided him back to his home, which took many weeks of travel. When he set foot inside his shop he didn’t recognise it all. In fact, he did
n’t recognise anything. But the girl understood, for she too had met the fox and she too had seen his little tin box. But she was smarter than the fox and had snatched the box out of his paws and opened it herself before the fox had had the chance to trick her,so now all the memories were hers, even the fox’s. Now she knew everything and she made it her life’s work to give back all the memories to all the people they belonged to, a task which had eventually led her to her father.

When the old man regained his memories he was overwhelmed with emotion and gratitude and asked for her forgiveness.

“Why do you need my forgiveness?” she asked. “Don’t you know that love forgives all?” And she took the old man’s hands in hers and kissed them.

“But it is I who should be asking for your forgiveness,” she then stated simply.

Surprised the old man asked her why.

“Because,” she said, “When I was a small child I wanted your love so badly that I forgot the most important thing in the world.”

“And what is that?” asked the old man feeling curious.

“That no matter what happens, no matter how small and insignificant you think you are, you are never alone. There is always someone who loves you. Even if you don’t know it.” 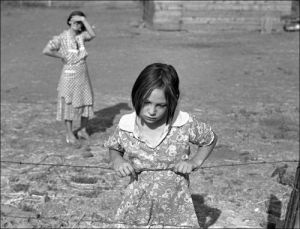 “I don’t understand,” said the man.

“Because I felt alone and small I wanted you to learn how it felt to be lost and alone. When I came across the fox and tricked him out of his box I knew what had happened to you but I wanted you to feel the same loss as Mother and I felt when you left us. I wanted you to learn that lesson. So I didn’t seek you out at first. I wanted to return all the other memories to those other people, especially the ones who had helped another. They deserved to be helped.”

“What?” shouted the old man angrily, “Because of you I have wandered and struggled for years. I lost everything. How could you do that?” Then he stopped and realised what he was saying. She was not to blame for his leaving, he had done that himself. He had met the fox and been tricked by him. She had done nothing. It was all his own fault!

The young woman looked into his old and crabby face. “I did it because I love you,” she said. “Now, when you see someone alone and lost perhaps you will understand how they feel and perhaps you can learn to make their lives better? When you leave your family, who need you, to follow your own dreams, it makes life very difficult. When you left us we had a terrible time. We had no money and mother had to take in other people’s washing just to feed us.  But she never blamed you. She understood.”

The old man realised what the young woman was saying and his heart broke. “I am so sorry,” he said. “I never thought about all of that. I was only thinking of myself. I see now that we need each other and that our way can be lost when we don’t know who we are or where we are from.”

“That’s it,” his daughter laughed joyfully, hugging the old man tightly. “Now you understand…and so do I.”

The old man had learned a difficult but very valuable lesson. He learned that in order to be someone in the world he must think about and care about other people.

That is how we know who we are and why we are really here.

And that, my friends, is a life well lived.

Durrington Walls and the Cuckoo Stone.

Having a Past Life Reading.